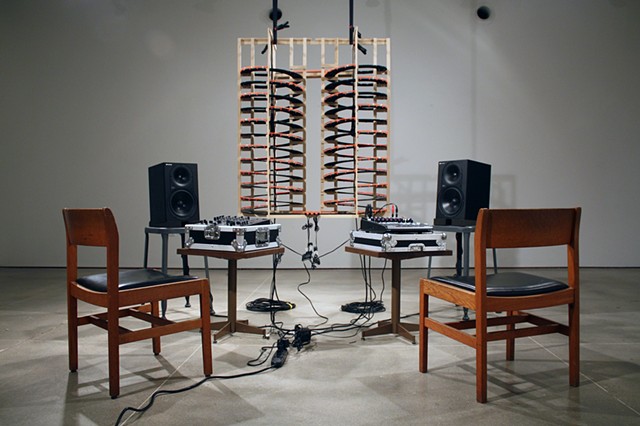 Justin Bitner is an artist who resides in Madison, Wisconsin. He is a graduate of the MFA Studio Art program at the University of Wisconsin where he was a University Fellow. During this time he was an instructor of record teaching Two Dimensional Design and held a Teaching Assistant position in the Woodworking/Furniture area. He received his Bachelors of Fine Arts from Illinois State University and a Masters Degree in Sculpture from Eastern Illinois University.

I experiment with projected images, amplification, the placement of microphones, feedback, and the pairing of electronic and acoustic sounds. I am interested in the musicality of the everyday object. Using looped sound as a metaphor for the cyclical nature of existence, I create environments that blend sound and objects, providing a space in which one can reflect on the temporal nature of the world they exist in. I research the crossover between memory and reality. Beginning with aural moments, I zero in on a memory of sound from my past, using this as the cornerstone on which to build a tableau. Experiencing a sound can generate a haptic moment that has the ability to transport awareness into a past moment of time, recreating that moment within the mind in a very realistic way. During these occurrences one can often hear the sounds, smell the scents and exist within the memory that they are immersed in. Though the memories seem to paint a perfect picture of the past, they are actually a hybrid of the past memories and present ideas. If one were to write about a moment from the past twenty times, each version would be a little different. Collecting found objects is a key component of my creation process and aesthetic. I am interested in objects that are cast off and useless in everyday contemporary society. I create my installations by placing discarded small parts and moments together. Meaning is created by their physical relationship, creating a metaphor for the way memories are organized in the brain. The old and the new combine to create hybrids, which allude to future possibilities. The constructed tableaus are meant to act as meditative cinematic stage-sets, allowing a viewer to contemplate the interconnectedness and Fluxus nature of time. There is a poetic nature in objects that reflects the sublime. The works I create are a meditation on the fragility of time, memory and the meaning of objects.